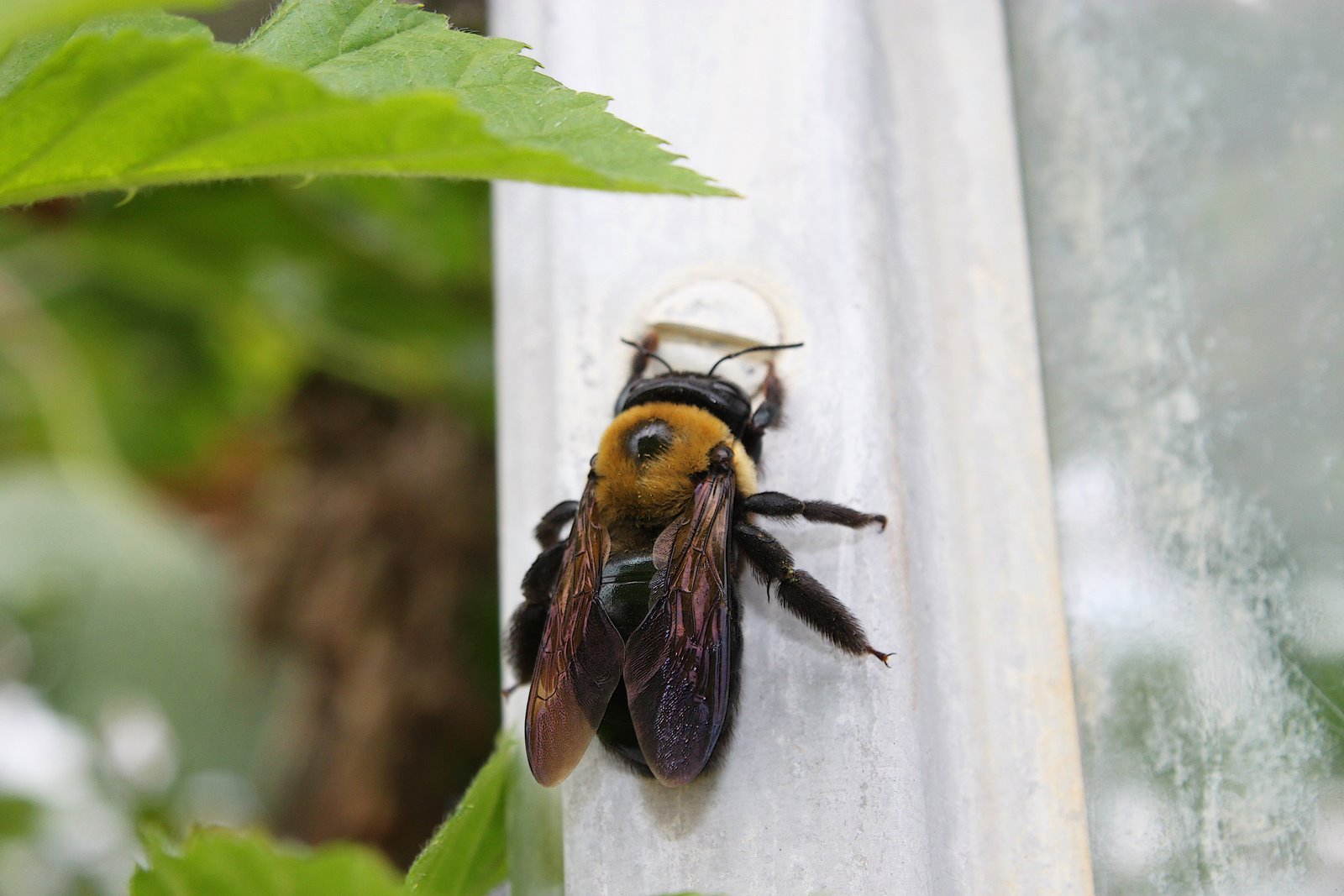 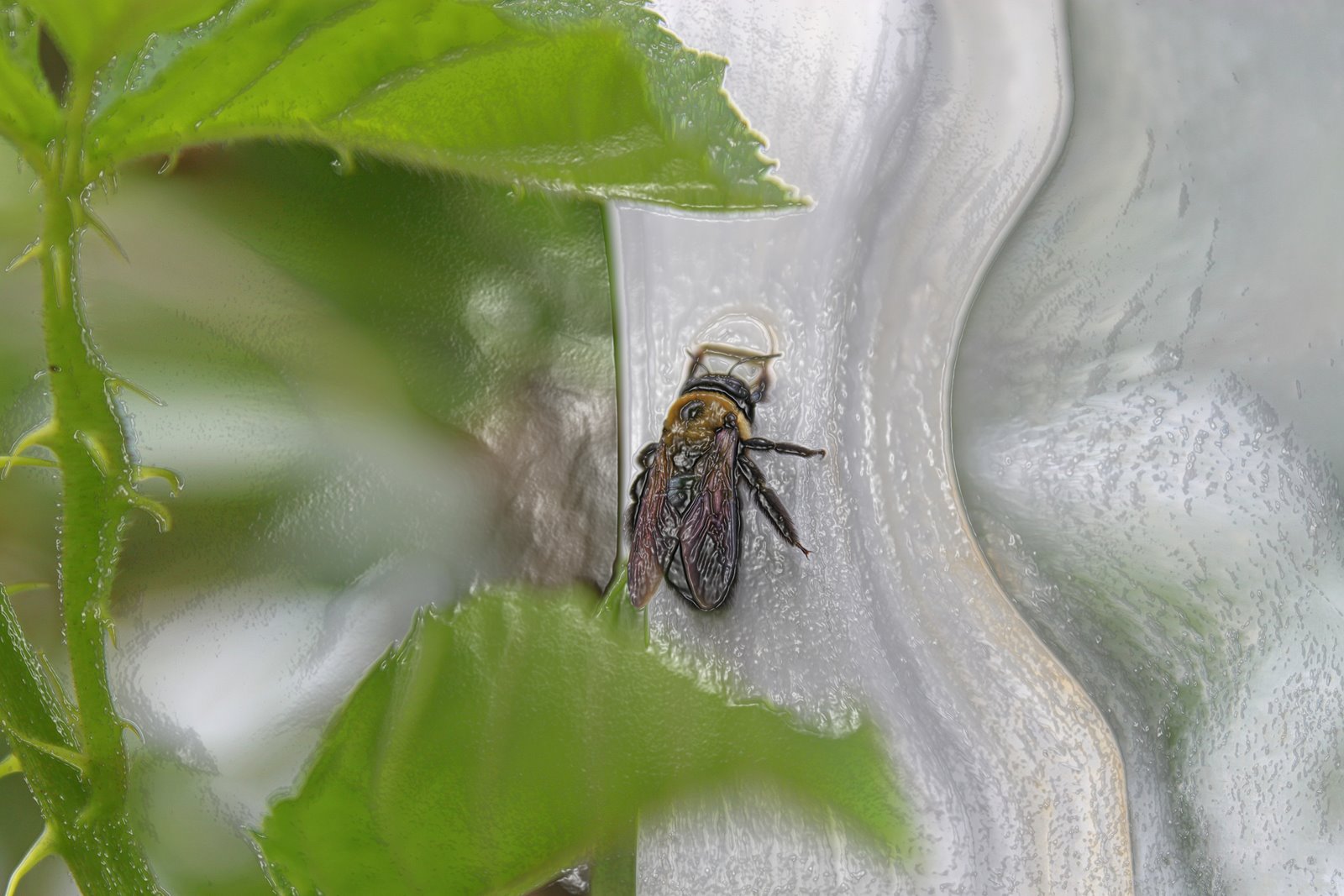 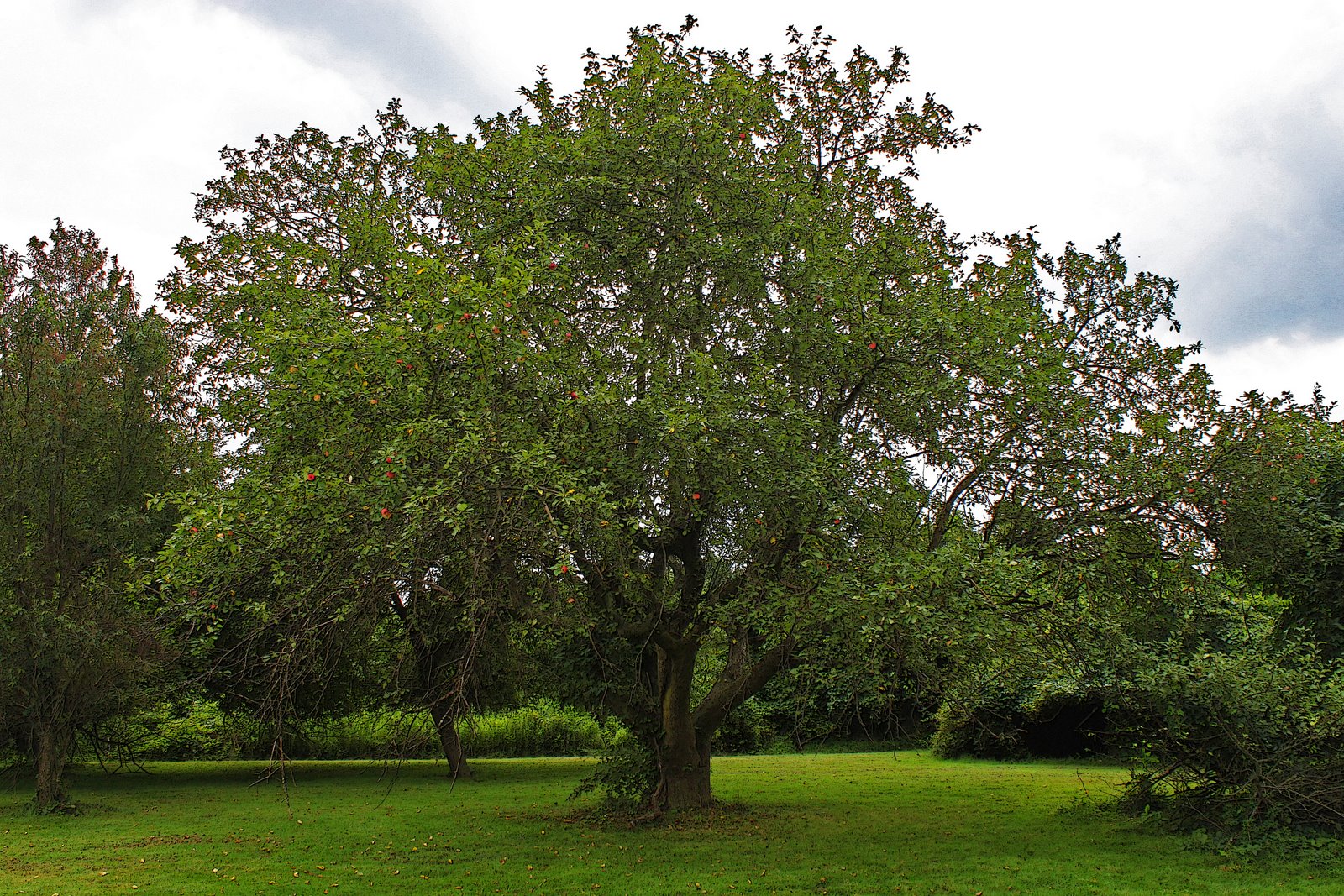 "Don't sit under the apple try with anyone else but me" That tune got stuck in my head when I saw this nice looking apple tree yesterday. The top picture looks like the bumble bee is trying to tighten or unscrew a screw. The second picture is the same bee with my surreal touch.
Posted by James at 10:01 PM 11 comments: 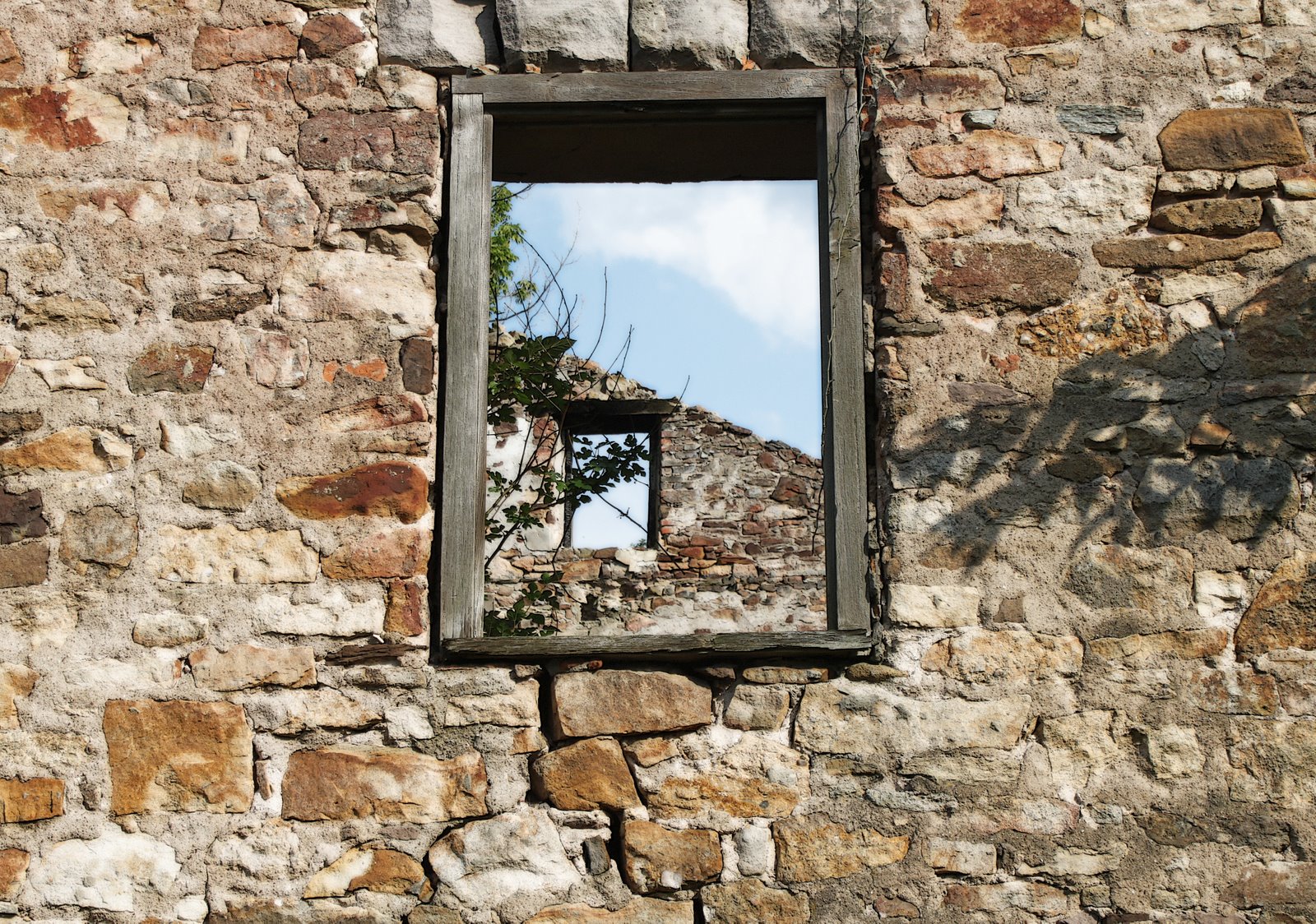 This window view is from the ruins of an 18th century mill.
I plan to do a post on this old mill and the old mill house on my Newtown blog when I have time.
To see other Window Views please click here.
Posted by James at 10:57 AM 23 comments: 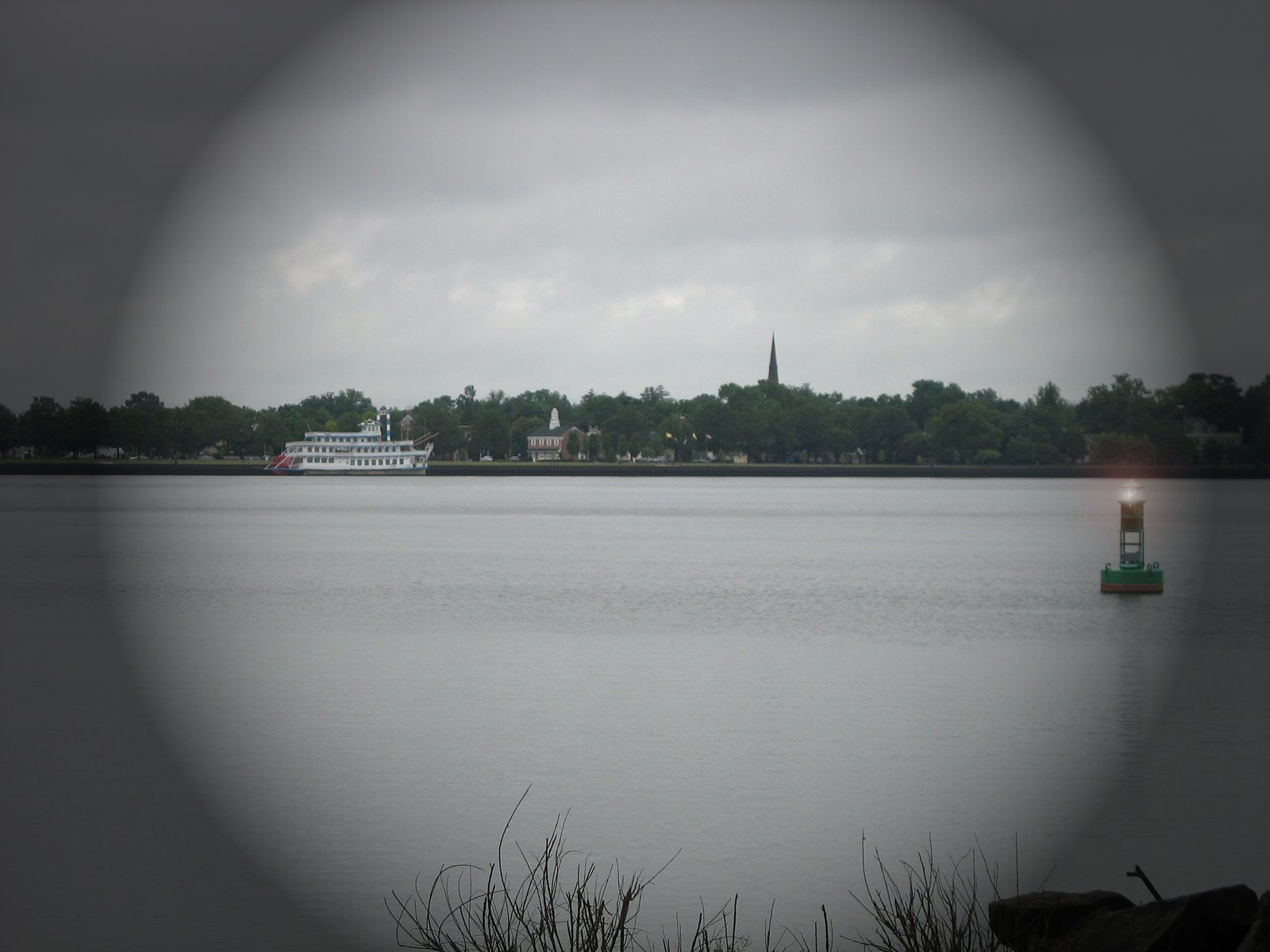 While standing on the shore of the Delaware river in the town of Bristol Pennsylvania I spied a riverboat and a very tall spire on the other side. I later found out that the town on the other side is Burlington New Jersy. The riverboat is called the Liberty Belle and can be seen here. The church with the tall spire is Saint Mary's and it can be seen here.

"B" is for Bristol and Burlington.

If you would like to see ABC Wednesday posts from other bloggers or join the fun yourself please click here.
Posted by James at 11:32 AM 27 comments: 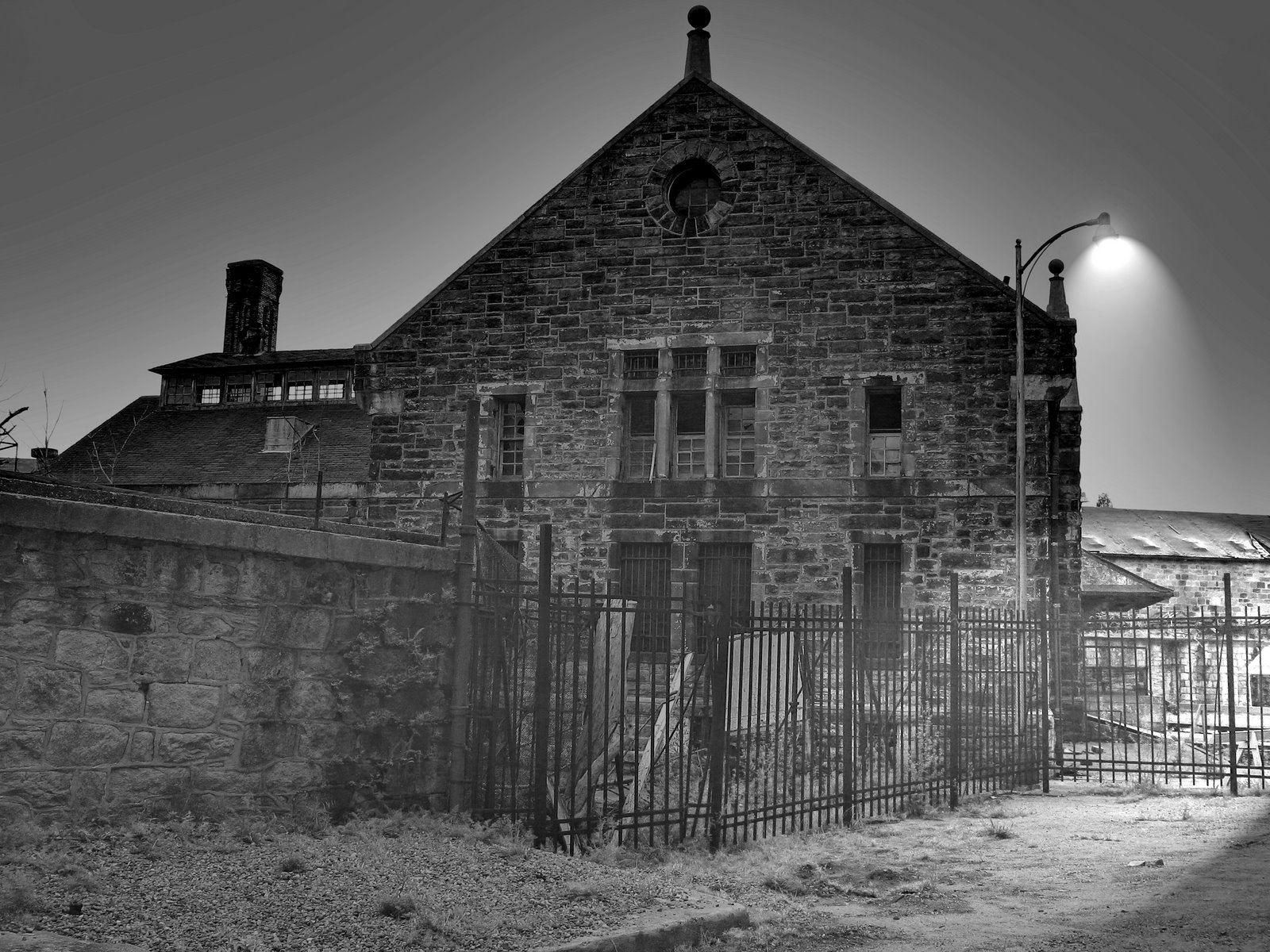 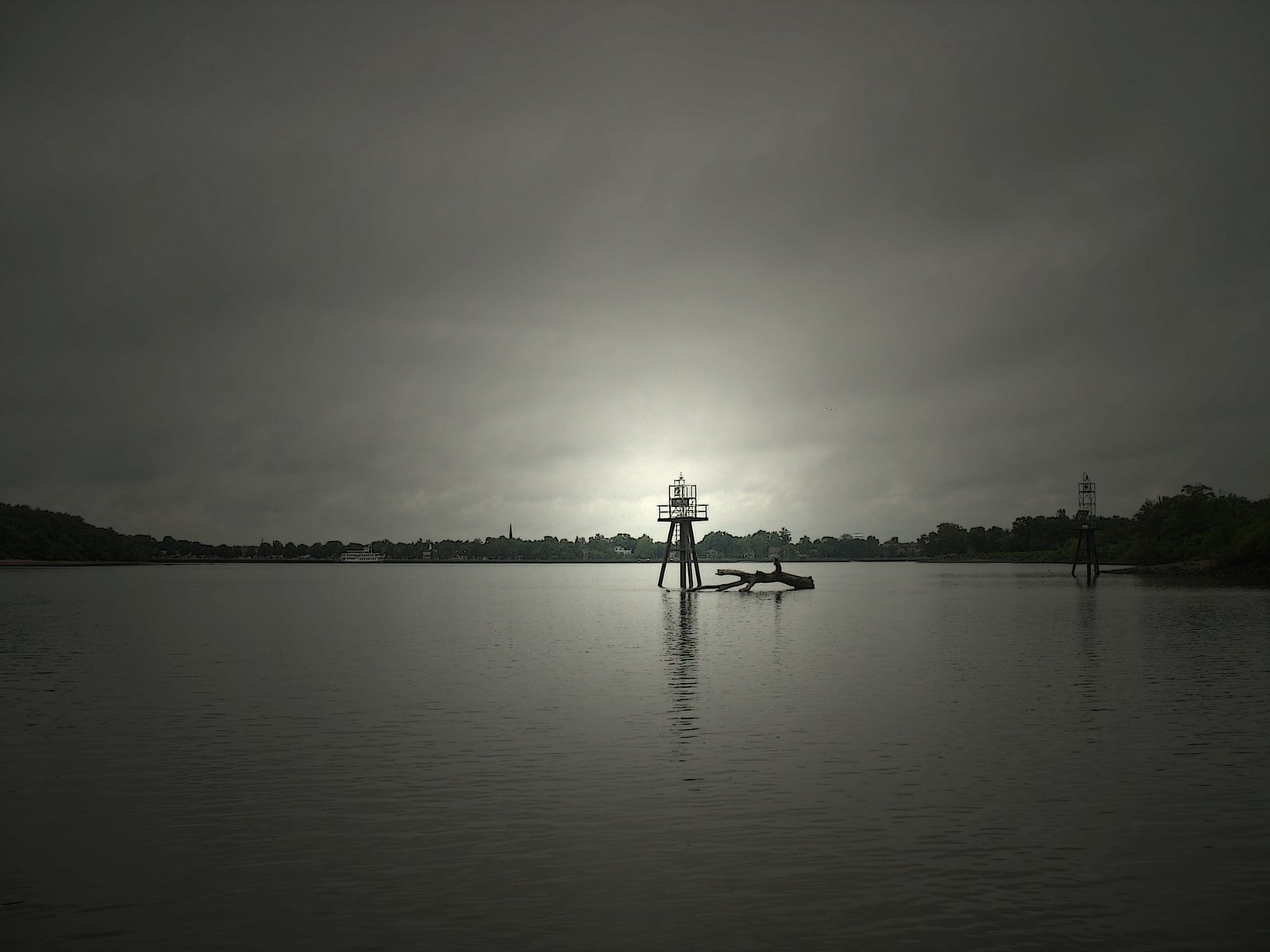 I took this on the shore of the Delaware river on a cloudy day in Bristol Pennsylvania.
Posted by James at 7:01 PM 17 comments: 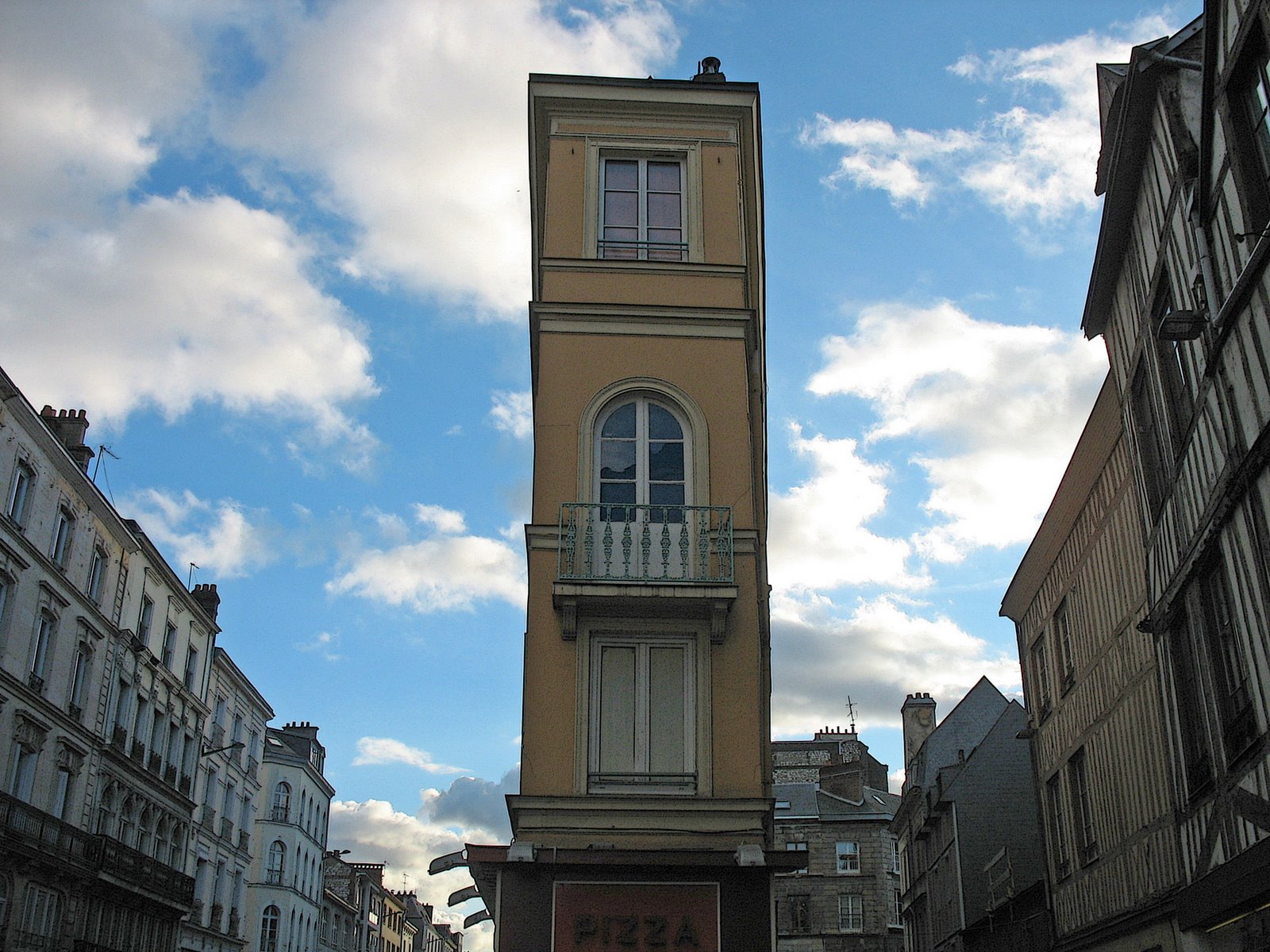 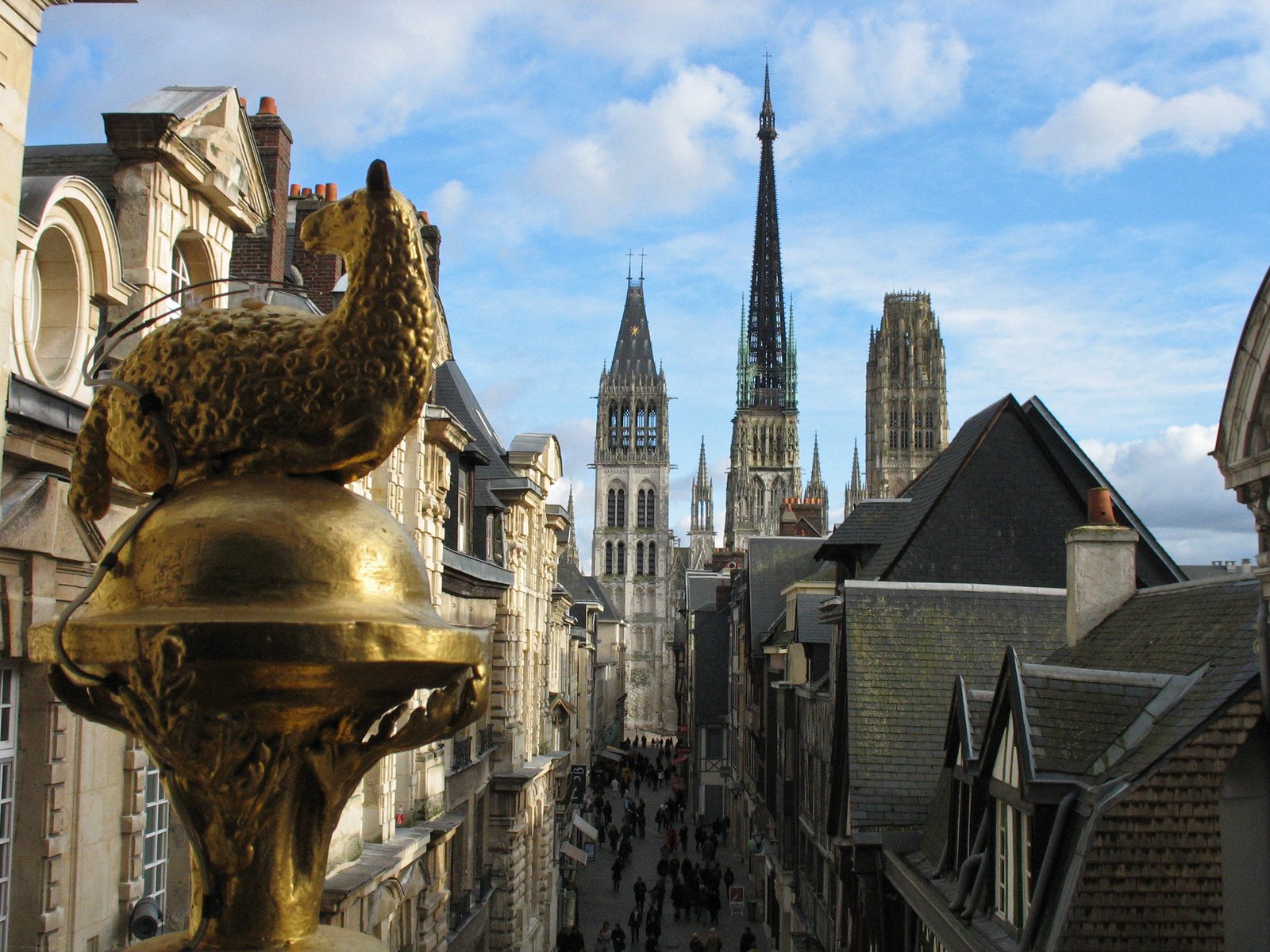 It's been raining in Newtown so I decided to post the cool beautiful skies of Rouen France that I took in February of this year. You might remember seeing some of these buildings in previous posts.

To see all of the Skywatch Friday posts please click here.
Posted by James at 12:55 PM 31 comments: 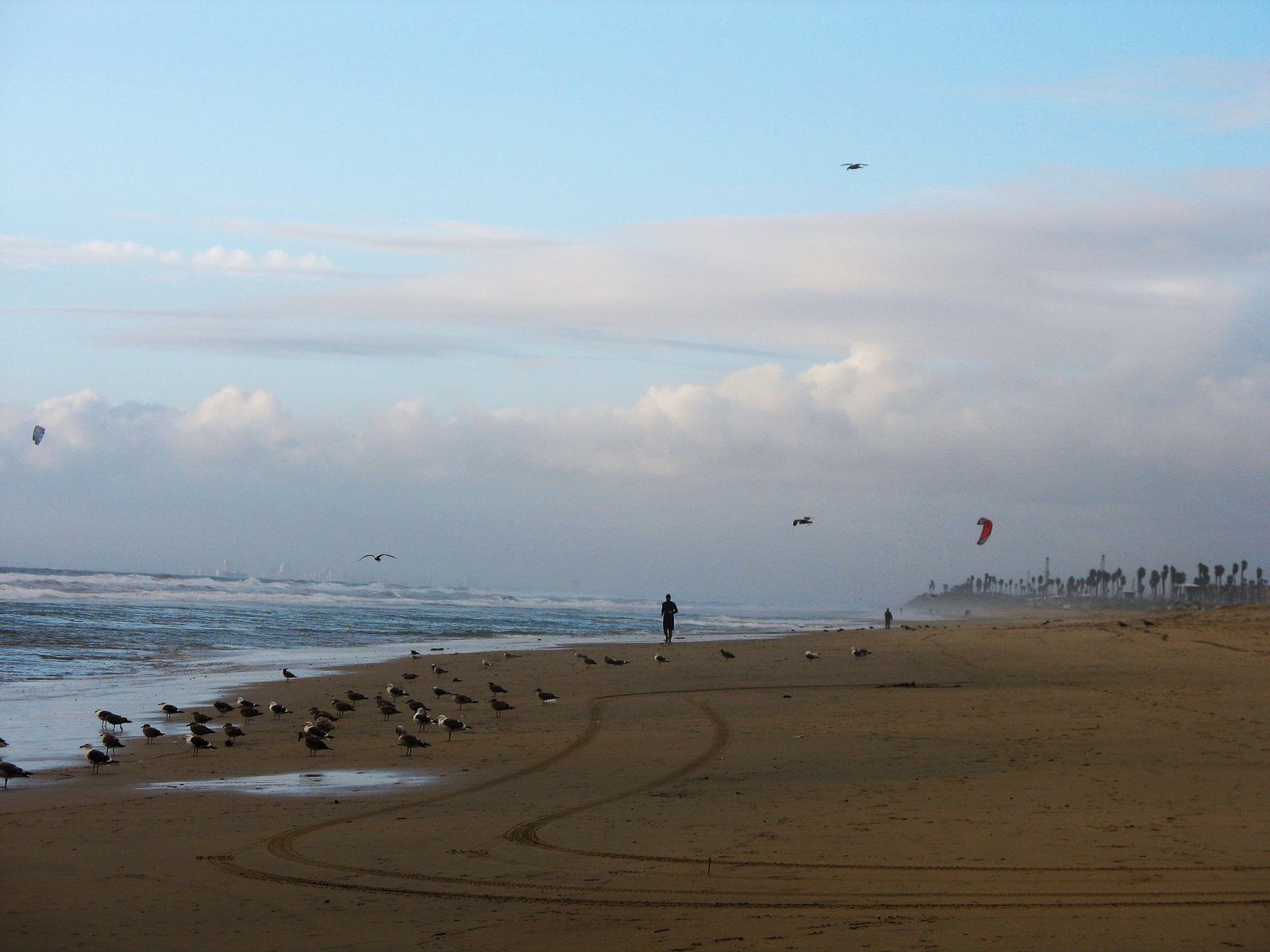 This is my old stomping grounds in Huntington Beach California, looking toward Long Beach.

Clowning Around on the Mean Streets of Dallas

"Yeah, man, my laughing gas is top quality, the best on the market." 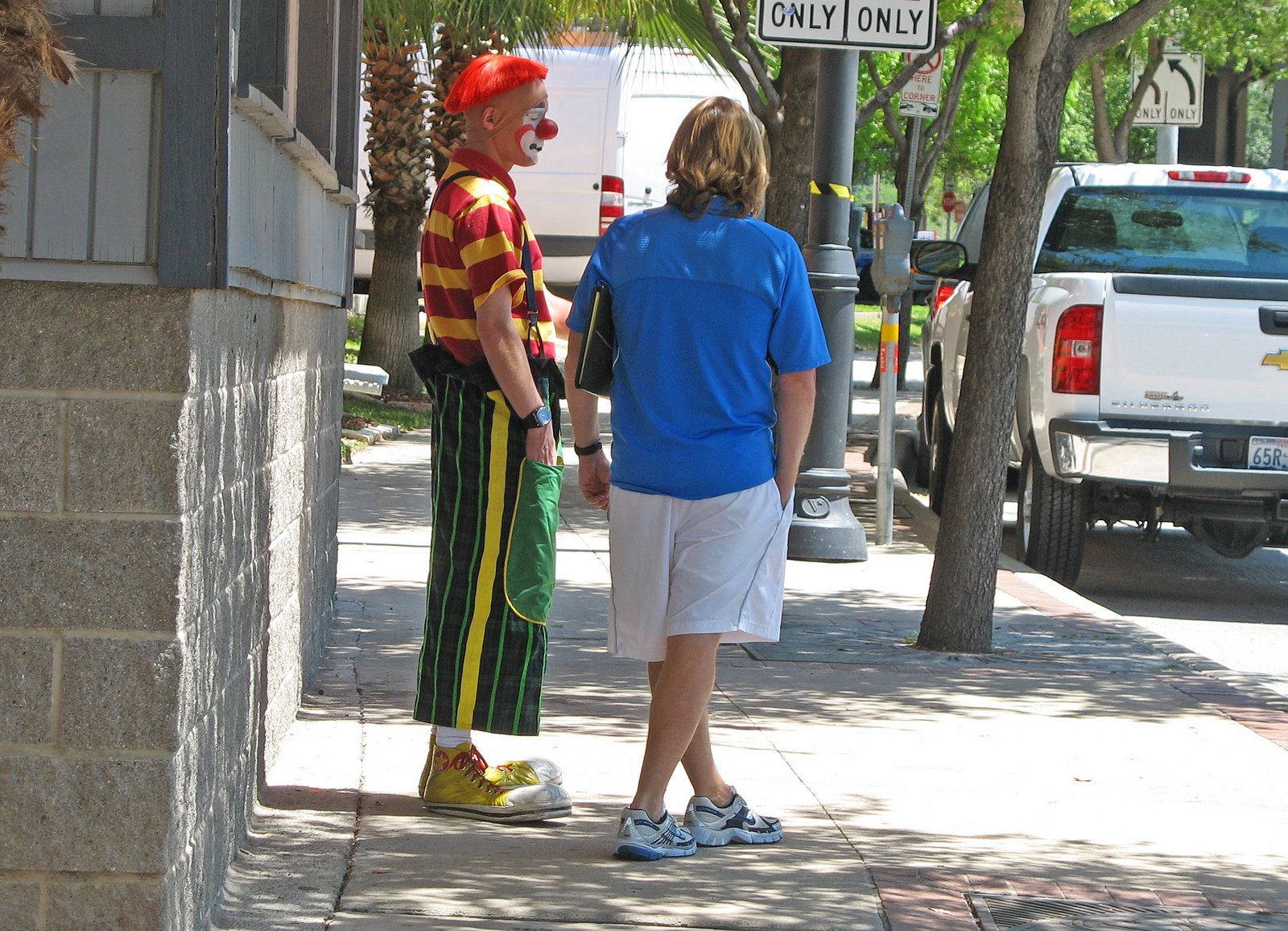 "What's the matter camera boy, you ain't never saw a deal going down? Get out of here before I box your ears." 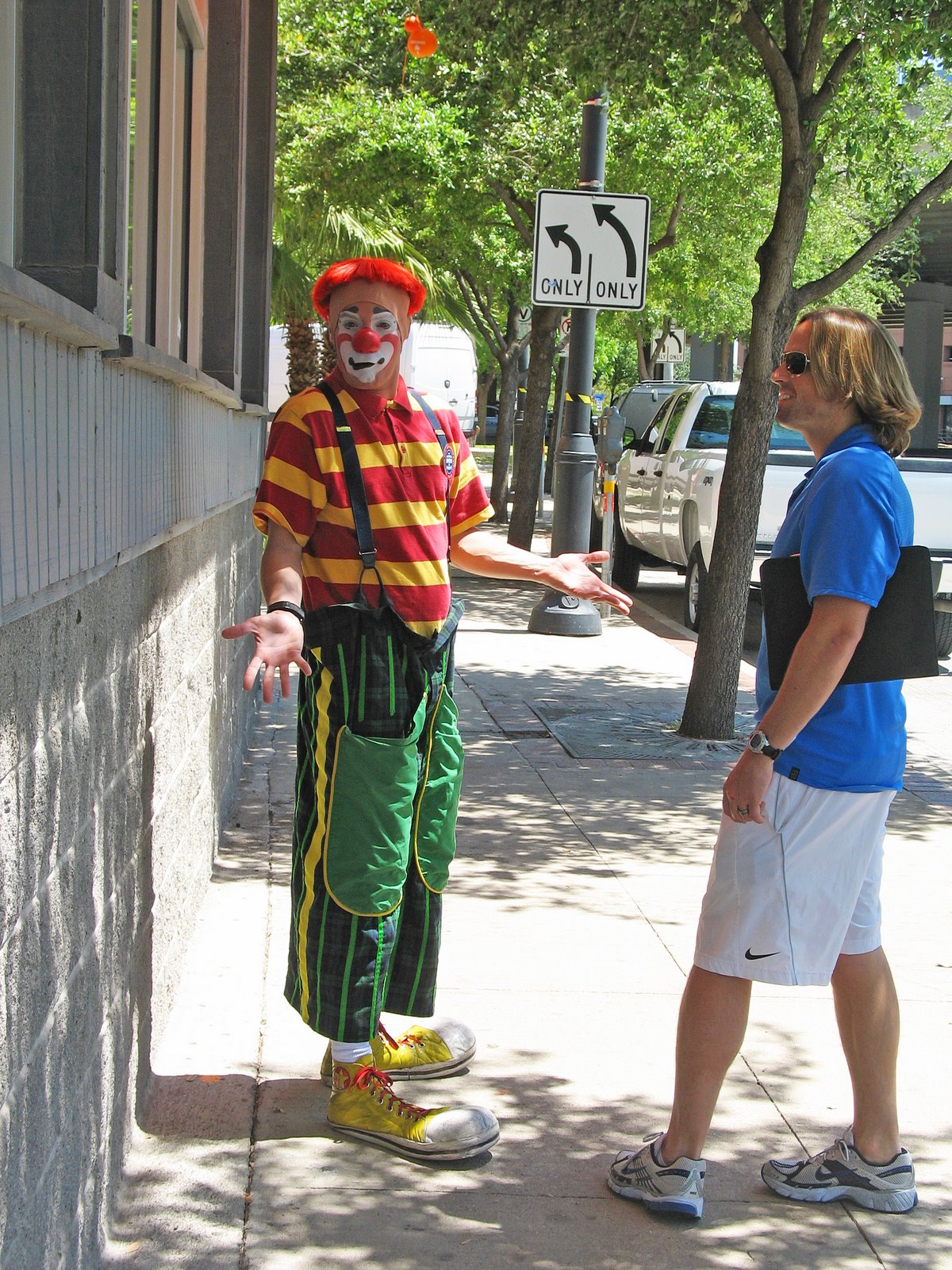 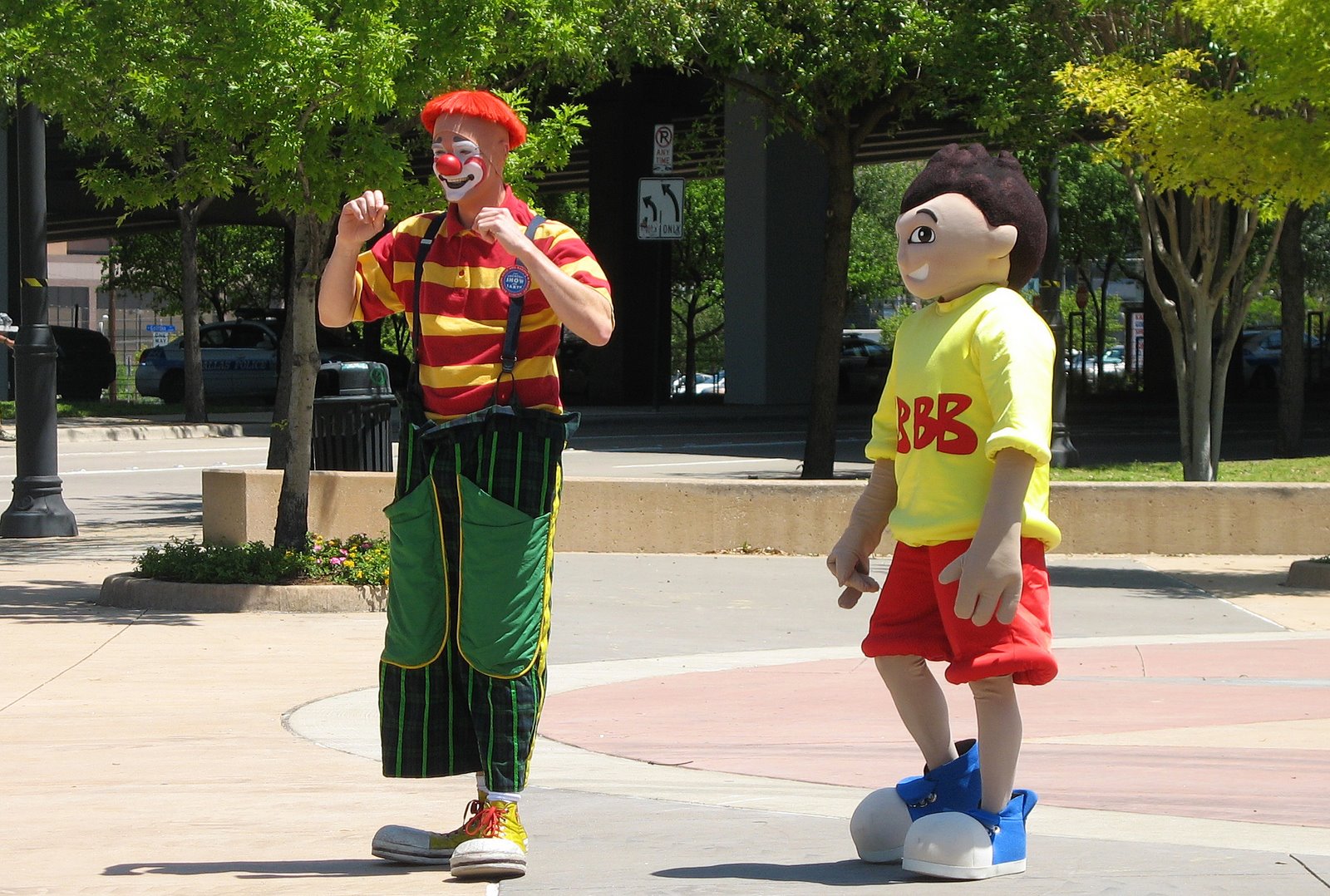 "Darn. The guy with the camera brought the cops with him. Hide the gas!" 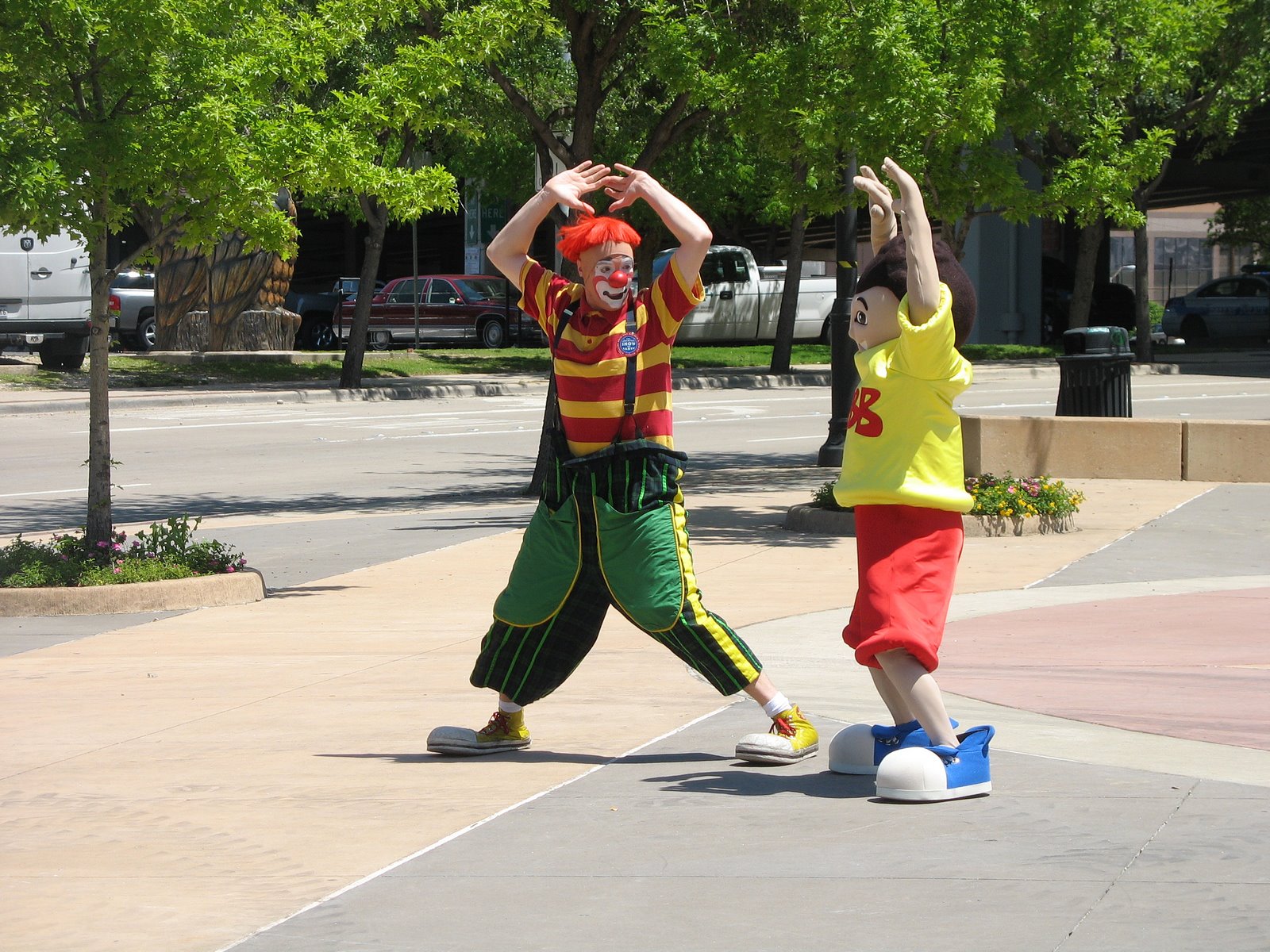 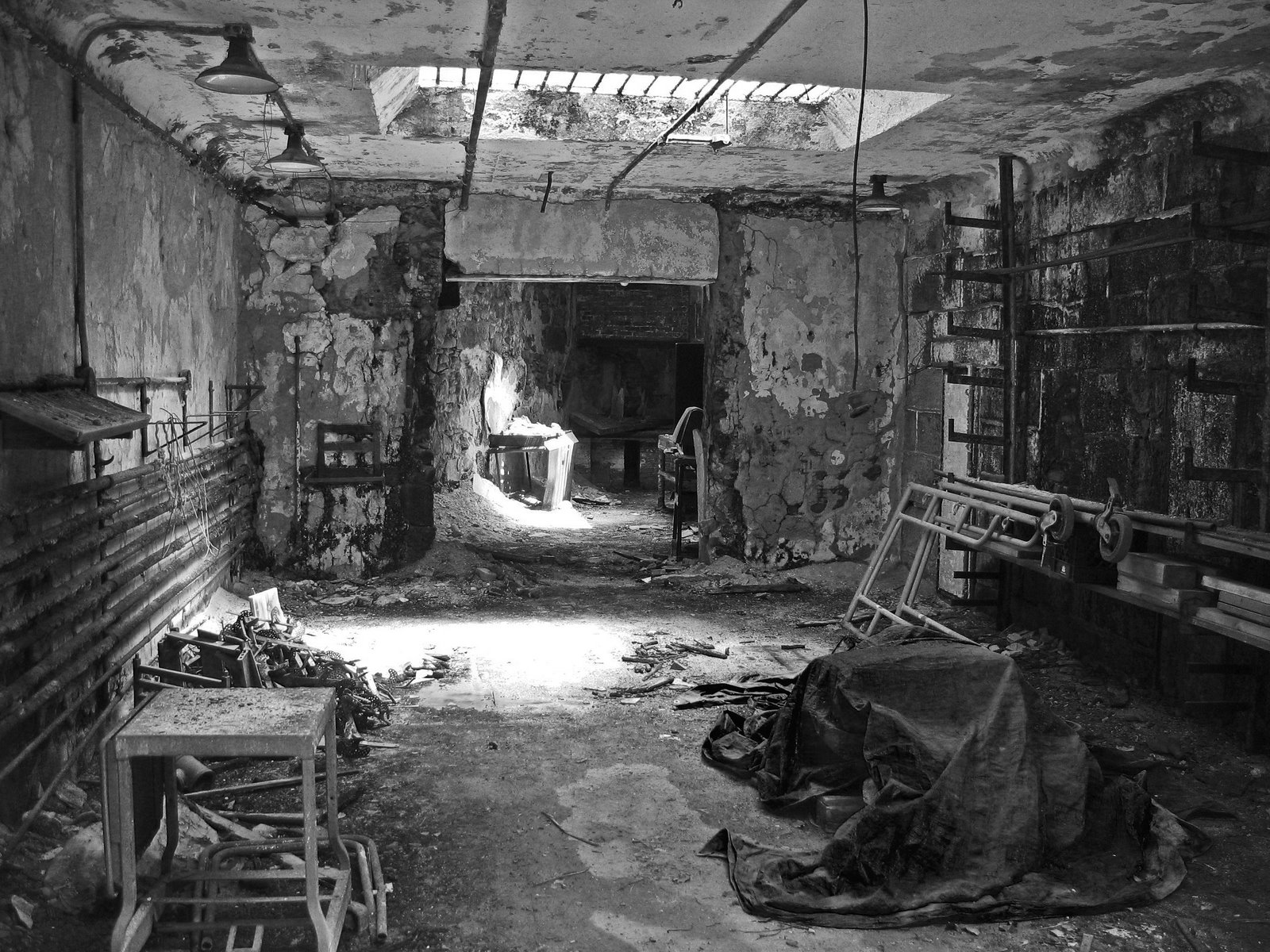 The Sky is Free 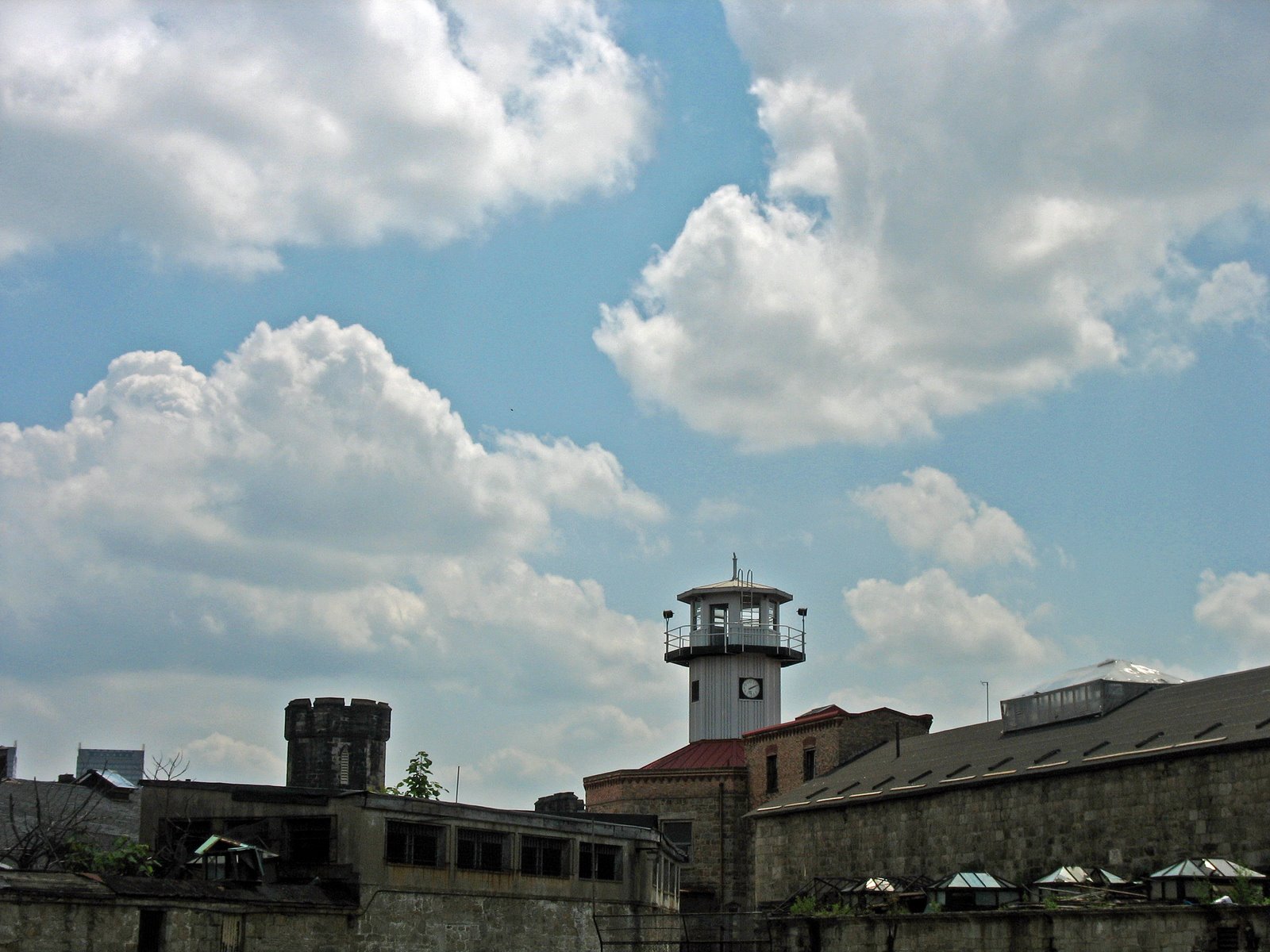 Yep, I just got Photoshop. 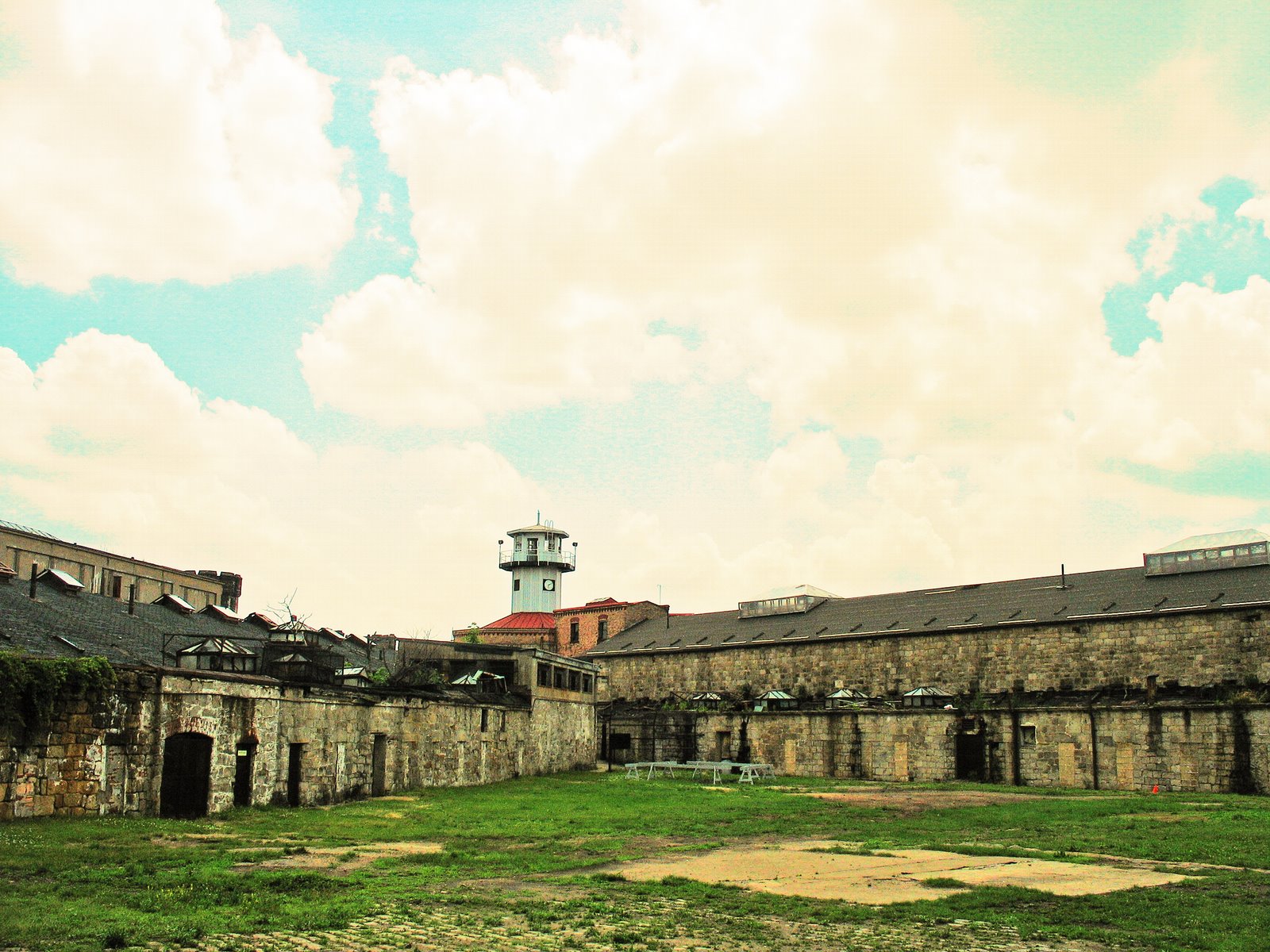 Thousands of inmates lived and died in Eastern State Penitentiary. I wonder how many of them watched the same sky as the people on the outside and felt a connection even a momentary sense of freedom.
You might have guessed that yesterday's picture was taken here too.
To see other Skywatch Friday posts please click here.
Posted by James at 2:50 PM 19 comments:

Fork in the Road 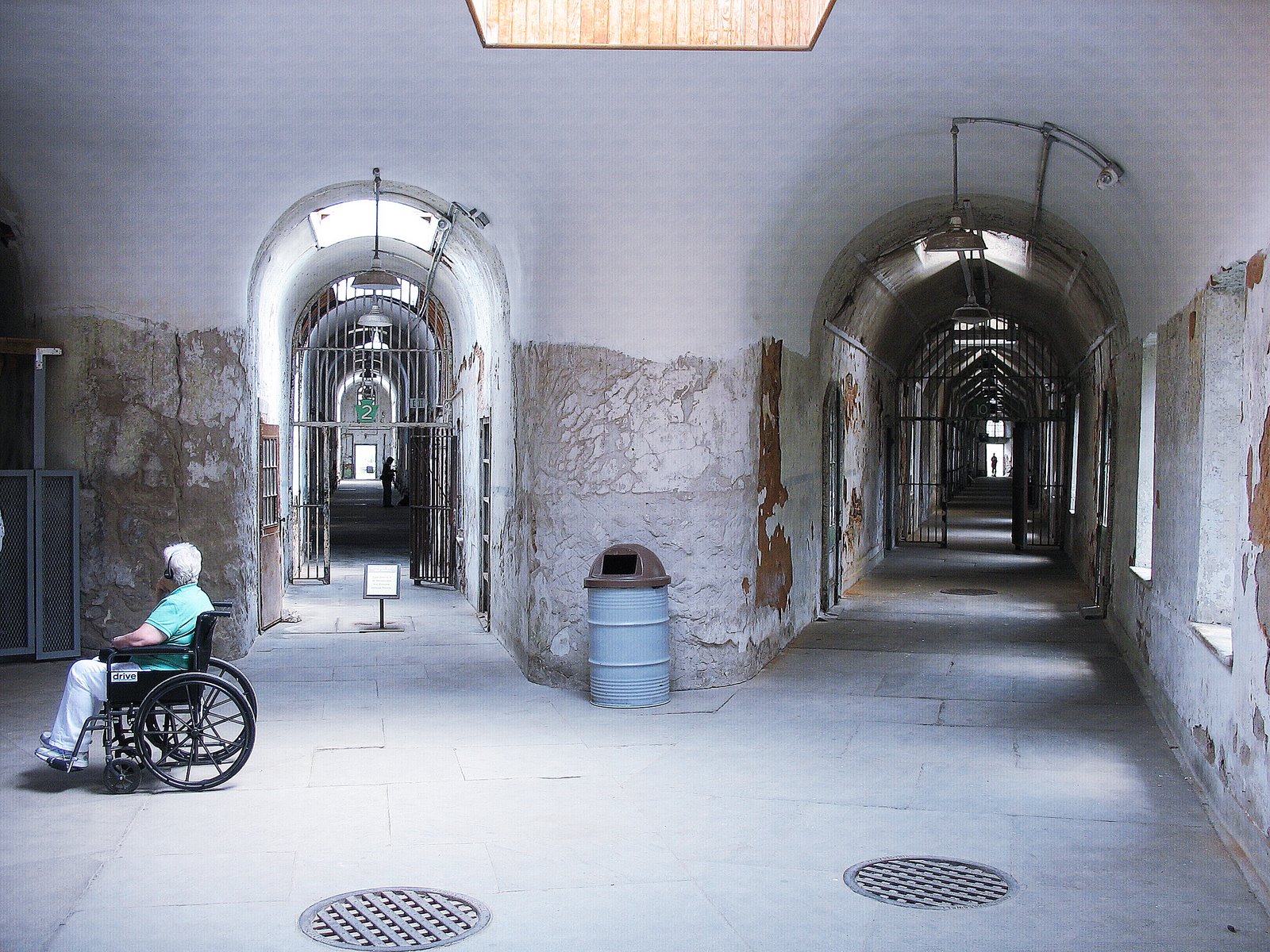 Which path would you take? 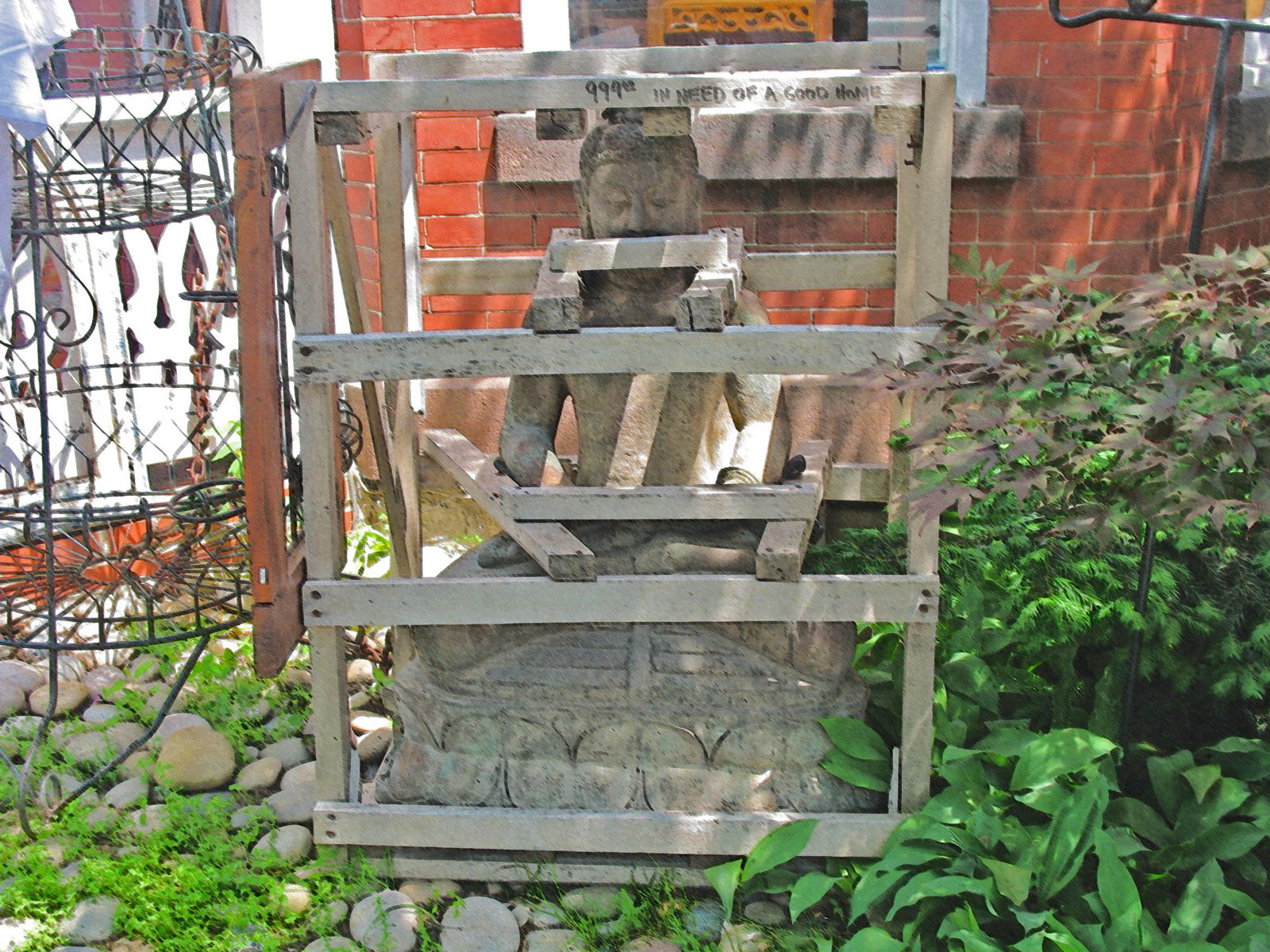 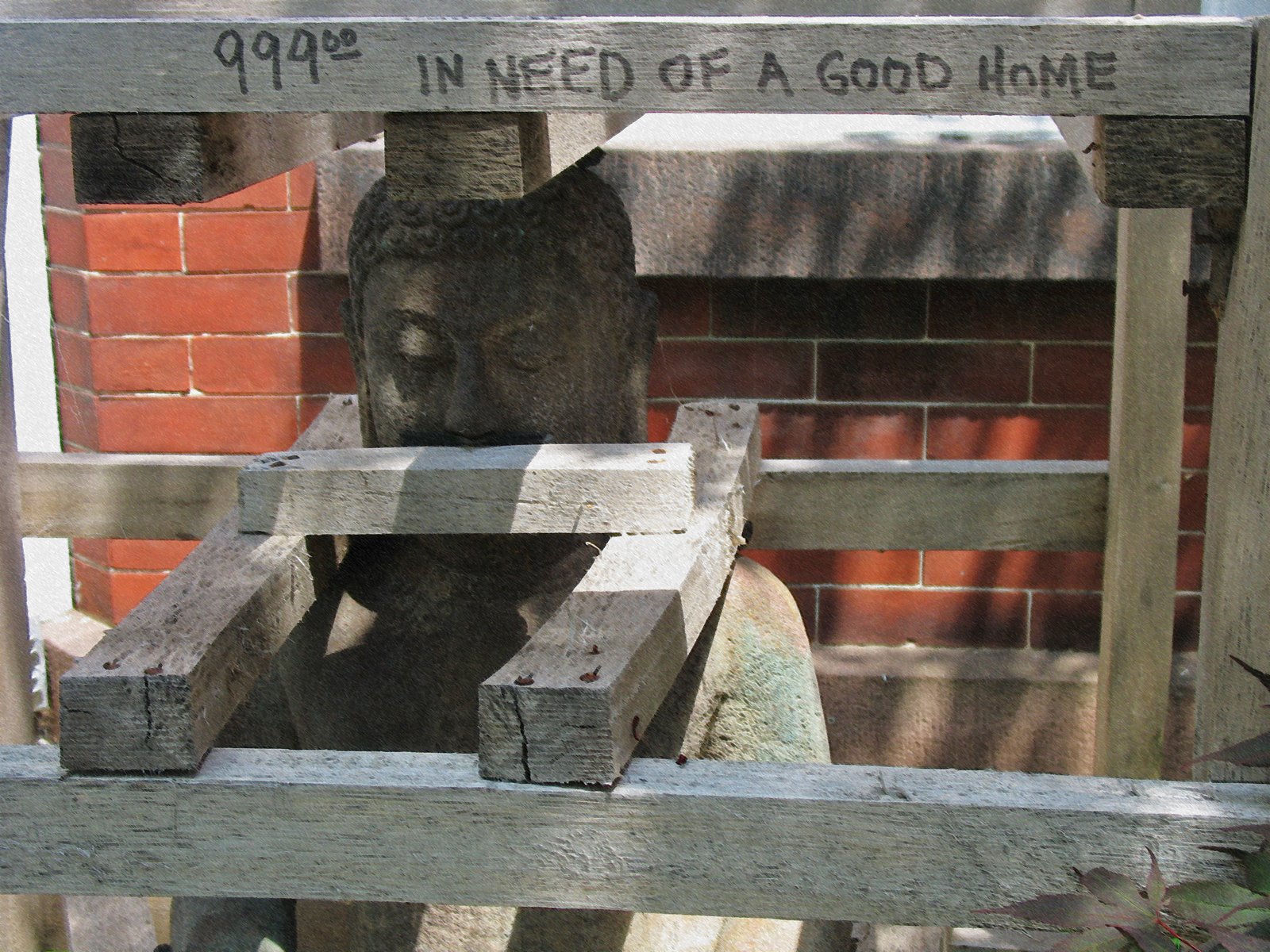 For a price you can have your very own Zen slave, or at least a Zen like statue in a box . 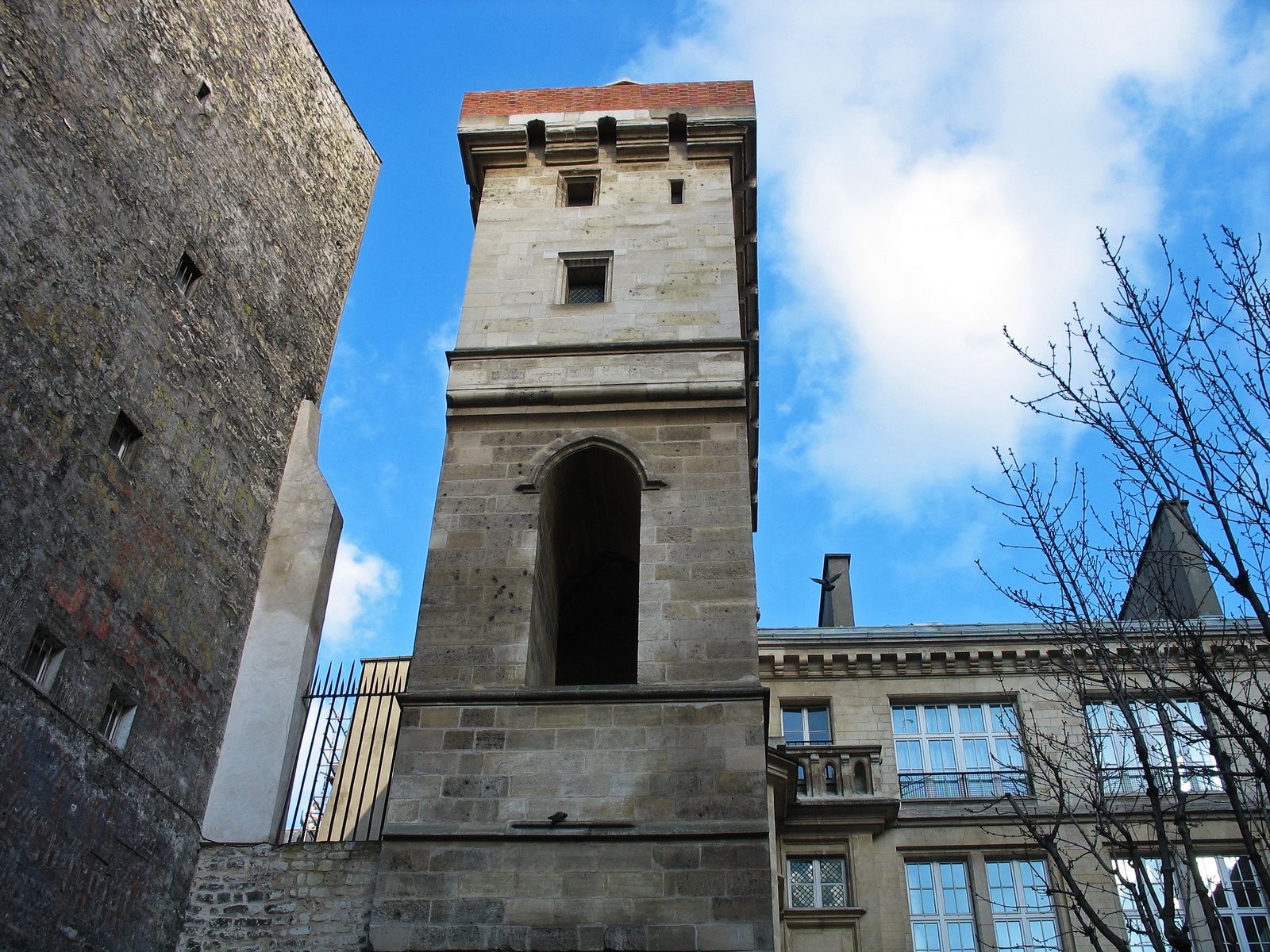 This is the very easy to miss Tower of Fearless John Duke of Burgundy, he lived from 1371 to 1419. It's in the 2nd arrondissement in Paris on Rue Etienne Marcel very close to Rue Montorguiel. The tower is actually called "Tour Jean sans Peur" and is Paris' only fortified medieval tower.


Can you see the pigeon in flight? I just now noticed it.
Posted by James at 10:49 PM 5 comments: 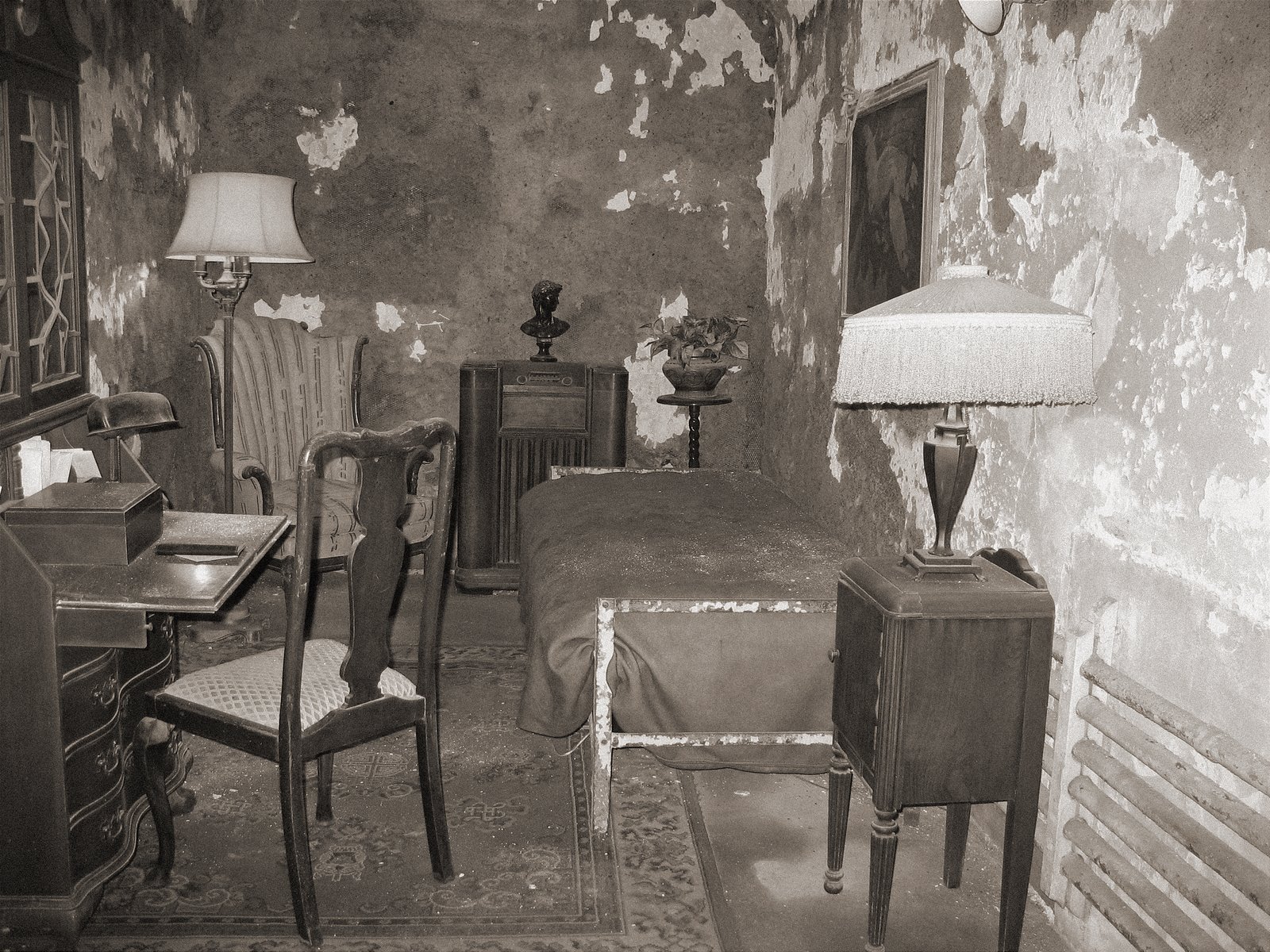 This is Al Capone's Eastern State Penitentiary cell preserved for posterity with Art Deco and Victorian furniture popular in the late 1920s. I that it looked much nicer back in his day.

Eastern State’s most famous inmate, Al Capone (C-5527) was transferred to his "Park Avenue" cell in August of 1929. Capone was reportedly quite pleased with his new quarters. An article published in the Philadelphia Public Ledger, August 20, 1929, described his cell:
"The whole room was suffused in the glow of a desk lamp which stood on a polished desk.... On the once-grim walls of the penal chamber hung tasteful paintings, and the strains of a waltz were being emitted by a powerful cabinet radio receiver of handsome design and fine finish...."
The article’s headline read, "'Very Comfortable' says Capone from Luxury Cell at Eastern Pen."
The restored cell, with its oriental rugs and fine furnishings, is a popular stop for many visitors.
To see my other Eastern State Penitentiary post click here. 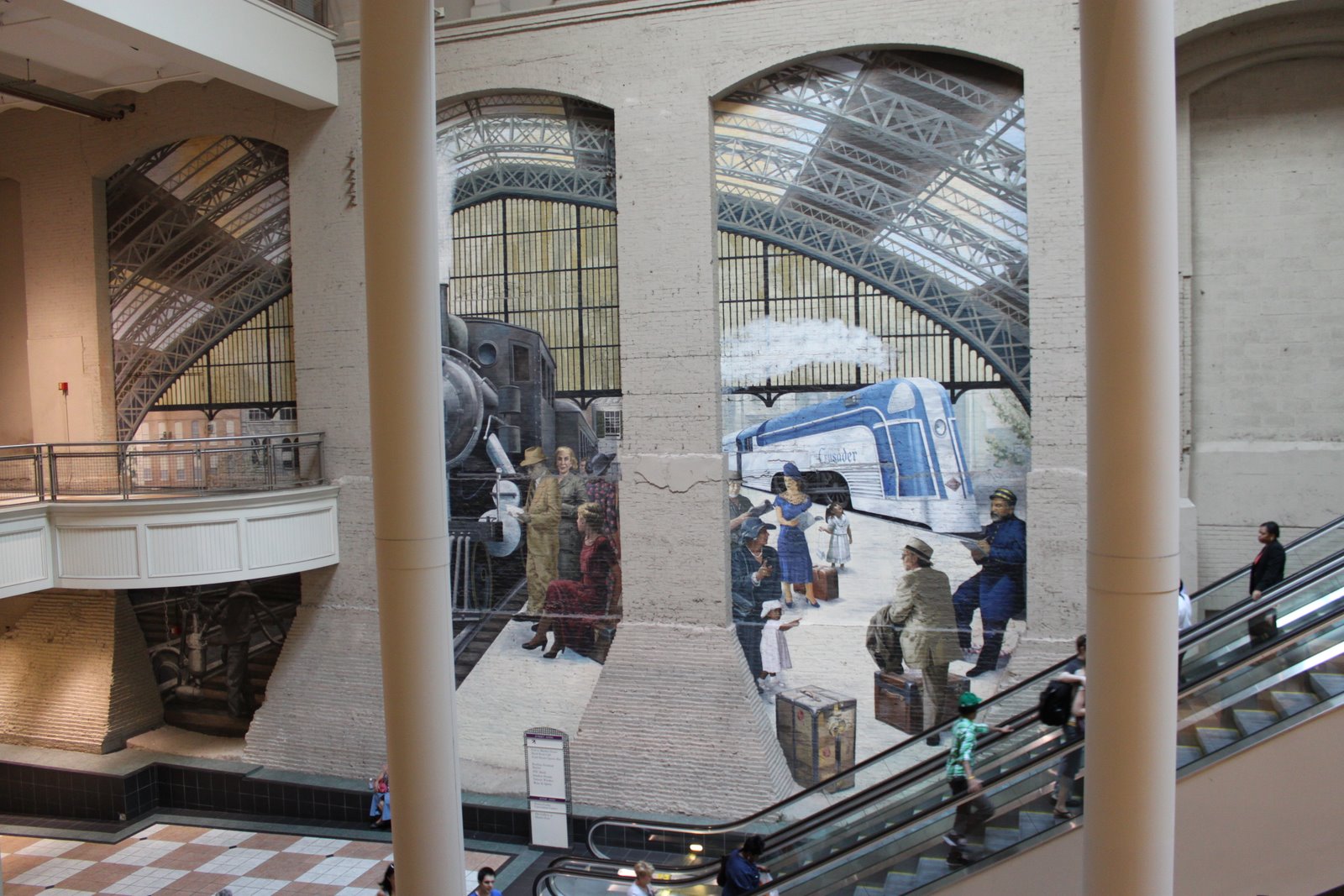 This is a peek inside the Reading Train Station in Philadelphia.
Posted by James at 10:34 PM 1 comment: 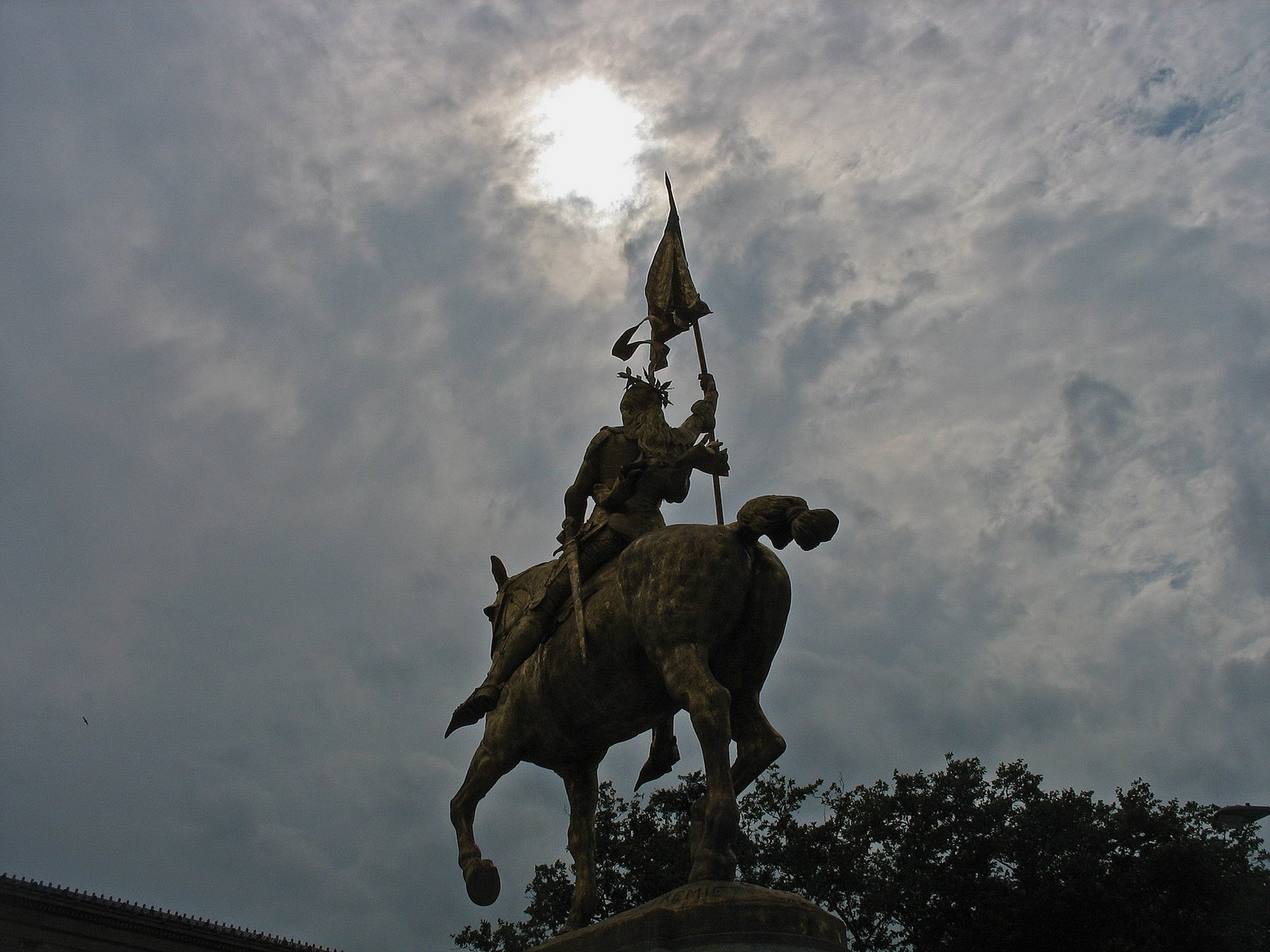 I really like this picture. The sky isn't clear and blue but I find it mysteriously beautiful. It looks like the statue has a heavenly spotlight above it.
I wish I knew who the statue is supposed to be. I do know that I took this picture with my old camera next to the Philadelphia Museum of Art last month. There were thunderstorms coming and going.
To see all of the other Skywatch posts please click here.
Posted by James at 1:00 PM 28 comments:

Waiting for the Show 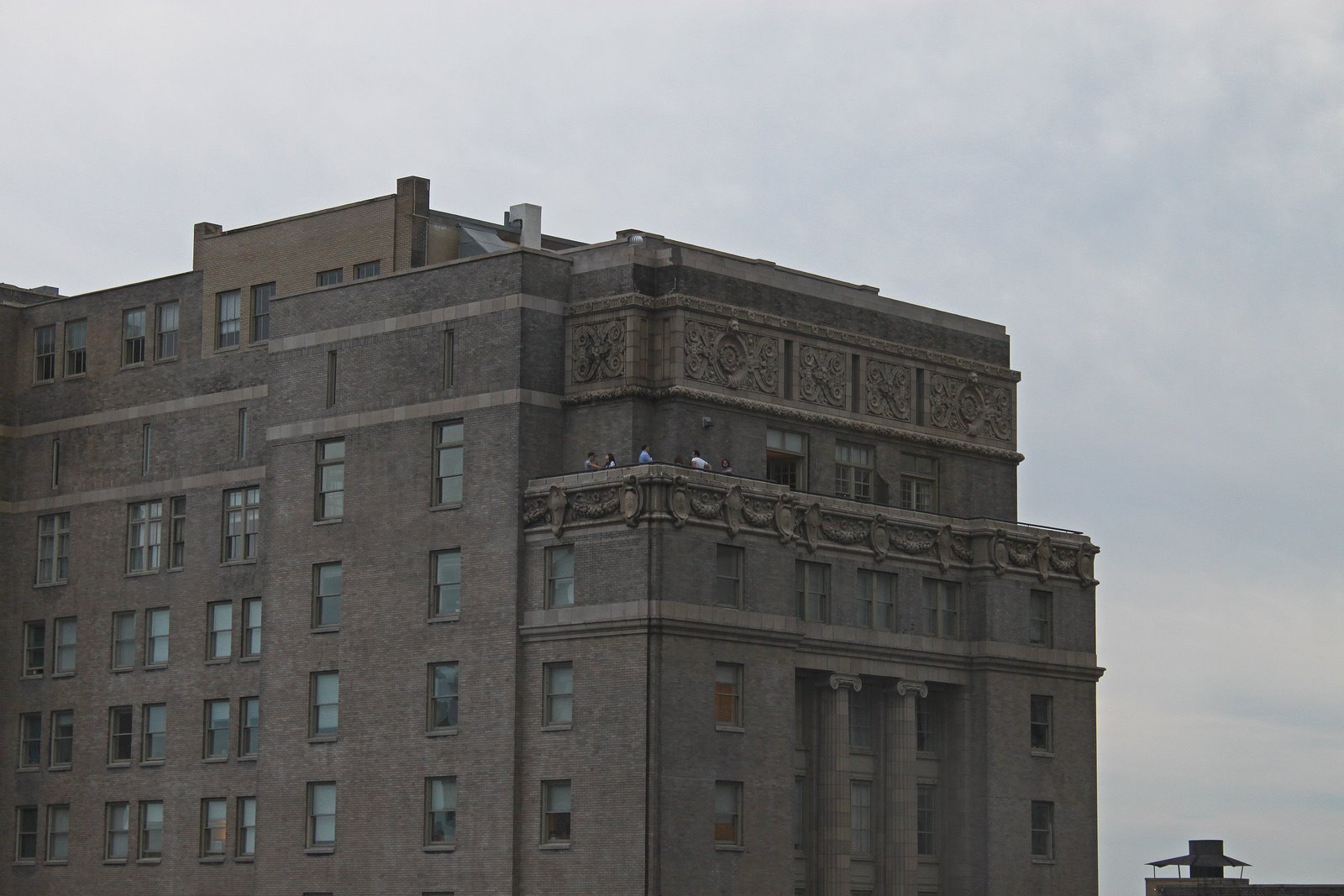 I looked out of my 21st floor hotel room window just before sunset on July fourth and noticed these people on a balcony high above Philadelphia undoubtably waiting for the fireworks to begin. They were a few hours early but what a great place to watch the show.
I just love the wonderful details on lots of the old buildings in Philadelphia.
Posted by James at 2:14 PM 7 comments:

I am proud and pleased to announce that Juergen Kuehn has awarded me the "Blog De Ouro" award. Juergen is a very talented poet and photographer who lives in the beautiful German town called Marburg. He has several blogs of photos and poetry so I encourange anyone who reads this to check out his blogs.
The slightly amended rules of this award are:
1)Show the award in your blog.
2)Link back to the blog that tagged you.
3)Pass on the award to 8 blogs that you love. (Since this award has been around for a while feel free to pass it to as many or as few as you want.)
4)Inform the bloggers that they have been awarded.
5)Take your time there's no pressure, but try to check out the oher awarded blogs.
I am passing the award to the following blogs:
Bogey: View from the fairway
Martha: the Daily
Bonnie: Australia: a quadrant in focus
Pam: Southern Journeys
Peter: Peter's Paris
Kcalpesh Ajugia: Pixellicious photos
Ruby: My Euro Travel Adventure
Thom:Thom's place for 4 well whatever...
Posted by James at 11:24 AM 10 comments:

Just another Brick in the Sky 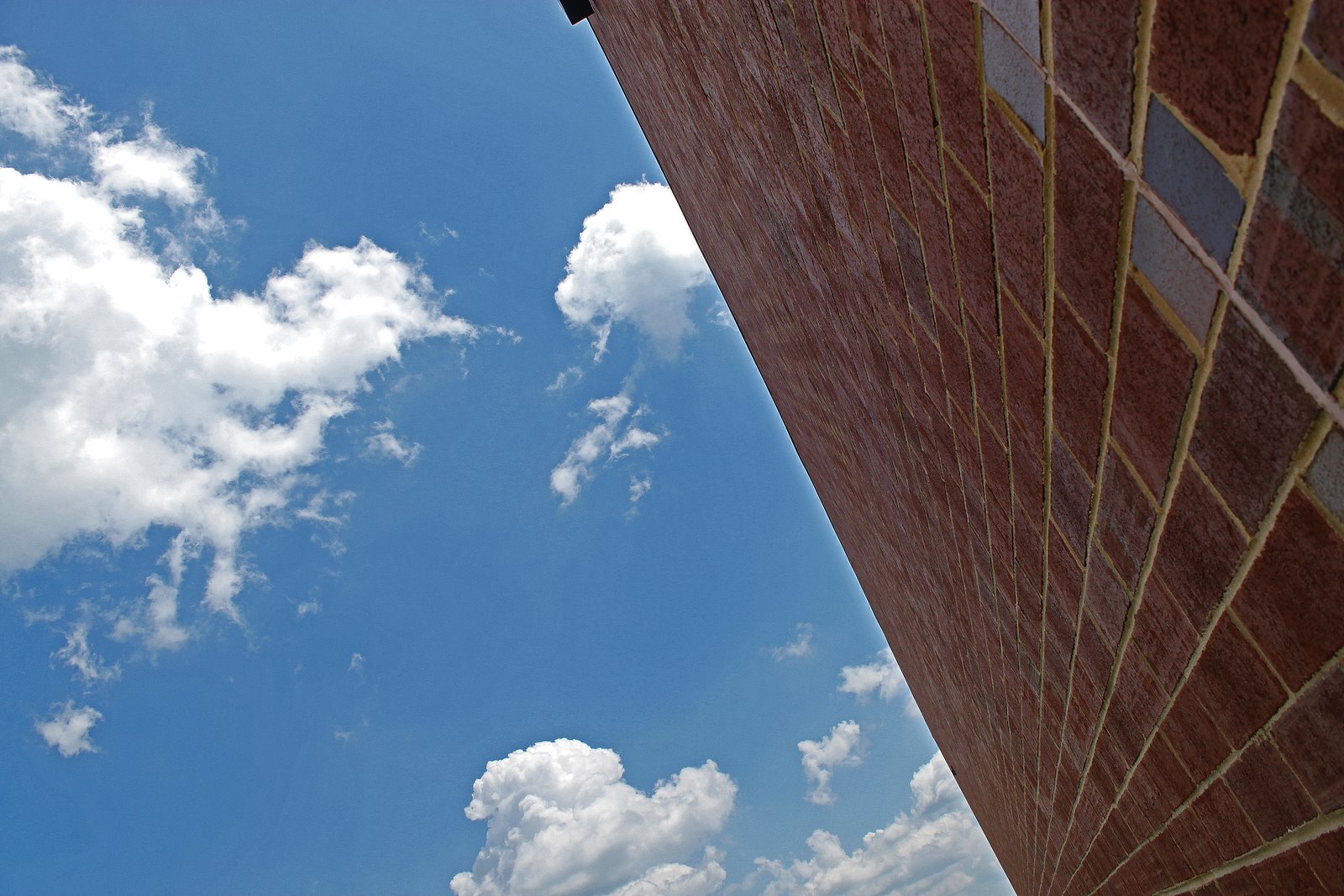 I have been having terrible problems with my computer so I couldn't post for a few days.
I took this picture because I thought the bricks and the sky looked cool together. This was taken a couple of days ago on one of my walks.

You may have noticed that this picture is larger than normal and for that I would like to thank Jacob from Ocala daily photo and Ai Shiang from It's Raining Ice Cream for their help.


To see the other Skywatch Friday posts please click here.
Posted by James at 11:09 AM 17 comments: